If you have images enabled, you should have just witnessed a brief animation showing a RISC OS 6 system booting up.

This section contains information about Acorn Computers, RISC OS and links to other related sites.

What are Acorn Computers?

Acorn was a company that made computers since the early micro computers. They designed and built the BBC Micro for the British Broadcasting Corporation in the UK. Around this time they also built the Acorn Electron Computer as well as various models of the BBC Micro, including the Model A, Model B/B+, Master and Master Compact.

In 1987, Acorn released the first 32-bit home computer called the Archimedes. This was far more powerful than the earlier machines. The Archimedes used a newly designed processor chip called ARM and ARM Ltd was born to manufacture and market the chip design, not just for computers but for all sorts of embedded processing applications.

The Acorn 32-bit architecture evolved through various models, from the A300 and A400 series, to the Risc PC. These machines run an operating system called RISC OS (commonly pronounced Risk Oss), although Acorn themselves used to pronounce it Risk Oh Ess.

RISC OS is a stable, scalable operating system which is stored in the ROM of Acorn machines. This has several advantages over disk based systems, namely that it cannot be tampered with or infected by virus programs. Having the OS in ROM also makes the boot process extremely fast and also gives support for disk-less workstations.

This is a picture of the RISC OS Iconbar which shows running applications and allows access to resources etc.

In 1998, Acorn Computers stopped producing workstations and allowed third party developers to Licence designs and the operating system. Although Acorn no longer have an interest in the computer manufacturing business (and were since bought out and asset stripped), companies and users within the Acorn community still want these machines in preference to WINTEL computers.

After Acorn, RISC OS was developed further by RISCOS Ltd and is now owned by 3QD. This means that users are not forced to buy PCs and can stay with a much more stable system. Although lacking some of the flashy features of Windoze, most people who use RISC OS find it much more reliable and productive than WINTEL machines. If you use Windoze regularly, you will probably have noticed hundreds of minor bugs and annoying features in the Graphical User Interface. Most people who use PCs accept that their machines will crash occasionally, loose work and waste time waiting for the machine to reboot and load windoze.

There have been several manufacturers producing RISC OS computers, including Advantage6, Risc Station, Micro Digital and Castle Technology who continued producing the A7000 and the RISC PC for a while after Acorn.

We, who use RISC OS, all know how productive it can be, the other platforms can fight amongst themselves, whilst we get on with our productive computing.

My computer setup is, an Acorn StrongArm Risc PC, an Acorn A3010, a Riscstation RS7500 and an A9Home computer. I also use Virtual RiscPC on a laptop. 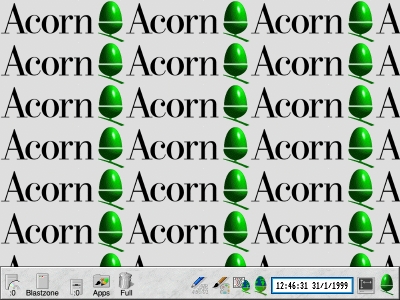 Email any comments (remove the invalid bit) to StevePotts